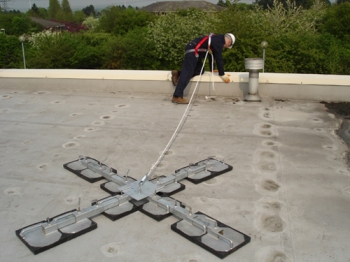 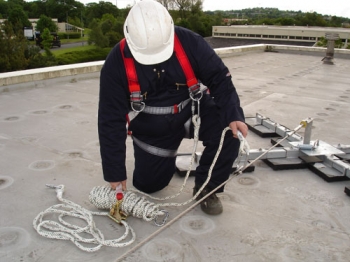 Mobile Man Anchor has been specifically designed to provide short term safety for low frequency operations where guardrails such as for maintenance of flat roofs or plant & equipment installed at roof level including air conditioning units, lightning conductors and telecommunications equipment.

The anchor weights are supplied with suction cup rubber boots which protect the roof and increase friction resistance, enabling the anchor to be used on all roof membranes, even in wet weather.

Mobile Man Anchor should, as far as is reasonably practical, only be used as a fall restraint system as opposed to fall arrest.

When utilised as a restraint system, a fixed length lanyard should be used in order to ensure the operative is unable to reach the leading edge.

The Mobile Man Anchor should only be used as a fall arrest system as a last resort and after careful consideration.

In this situation, the unit must be used in conjunction with a shock absorbing rope grab device with 14mm twisted rope.

Mobile Man Anchor can be used on any flat roof or industrial steel pitched roof providing the structure is capable of taking the load of the unit (250kg) combined with the weight of the operative and any additional equipment.  If the roof's pitch is greater than 15°, the Anchor must be placed on the opposite pitch to where the operative intends to work.

This provides fall restraint protection for operatives while they travel between each Mobile Man Anchor and fall arrest once they are disconnected from the lifeline and connected directly to an individual anchor.

What is the weight of the unit?

The combined weight of the assembled anchor is 250kg, making it the lightest unit on the market.

What is the weight of the heaviest component?

The heaviest single component is the anchor weight at 19kg.

Do I need to add additional weights for different roof surfaces?

No.  Unlike other anchor systems, Safesite’s Mobile Man Anchor can be used on all roof membranes without having to add additional weights.

Can I use my inertia reel with a mobile man anchor?

No. The HSE has issued a warning about the use of inertia/fall arrest blocks with an anchorage point on a horizontal plane, after research indicated that the block/cable could fail in the event of a fall.  As a result, we now recommend using a shock absorbing rope grab device and 14mm twisted rope with the Mobile Man Anchor.

Can more than one worker be connected to an anchor?

No.  Safesite’s Mobile Man Anchor has been tested to EN795 using a 100kg mass (average body weight) freefalling 2.5m.  To add extra people to the anchor would require additional load testing and more weights which would then make the Mobile Man Anchor less user friendly.

Thank you! Your review has been submitted for approval.