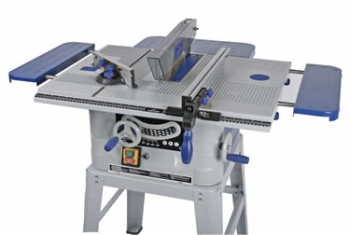 A very good table saw for this price range. Good solid and flat top, wide enough for all the jobs i do. Cheaper models rely on bolt on extensions which are always weak, not this model. Table height good, and comes with wheels which helps. Bolts for the frame are a little cheap but do the job. Took about an hour to unpack and set up. But had no issues and was at work very shortly after finishing my set up checks. Powerful motor, bit noisey but thats to be expected. Extracter port small than expected but not a massive issue. Overall i am very happy with the purchase.

Super quick delivery. Once I assembled it and took the first cut I realised that the blade was out of wack with the surface slideways. Nothing in the instruction manual shows how to adjust this so a quick call to Sitebox put me through to Graham at Dart Tool Group who are the primary distributor. Graham explained that to adjust the saw blade you need to tilt the blade fully 45 degrees and then you will see 4 bolts which can be loosened to move the blade and motor assembly. Because the assembly is sprung, it's a bit fiddly and so I found to pack the gap between the side of the blade and the throat edge was the best way of positioning it while I got the bolts tightened. Since doing this, the saw cuts square as long as I don't adjust the blade height (at which point it runs out again). A bit frustrating but I guess you get what you pay for. In other respects it's a good saw. Ok it starts with a bang and the dust extraction doesn't really do much but the ripping fence sits true and repeatability is good for the price point. The mitre saw may as well be thrown away as it's next to useless. I suggest building a couple of sleds and this should then work well for the majority of users who are likely to invest so little in what is essentially a major woodworking tool. I'll probably use it for a few months while I practice my skills and then pass it on to replace with something a bit more versatile.

Ordered the Fox F36-527 Table Saw and it was delivered just before midday on 29th - fantastic service. Goods arrived in good condition. Took a while to set up and feels sturdy enough for the job/s. Dual extraction capability so not too much clearing up after. Nice clean, quick, accurate cutting. Excellent quality item for the price.

Best value table saw for the price. I've no doubt makita or dewalt offer better heavier duty saws but unless it's being used for highly skilled applications I'd recommend this one actually. I have heard of inaccurate guides on the saw from other reviews but mine were fine

Thank you! Your review has been submitted for approval.